A Perfect Baked Potato will have a crisp skin with a light and fluffy inside. The steps to achieve these results are effortless! 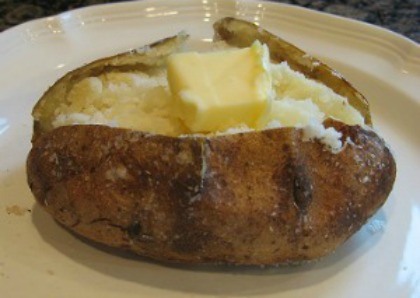 Most home cooks have been taught to cook a baked potato wrapped in foil, but this step is not necessary. If you enjoy baked potatoes from your favorite steakhouse restaurants, you will recall they have a crispy skin with a soft fluffy inside. Baking a potato in the oven with no foil wrapping is the secret to baked potato perfection! So – throw out that aluminum foil! Rub the outside of the baked potato with olive oil or butter instead. If you follow our easy guidelines below, you will always have perfect baked potatoes!

Which potato should I choose for baked potatoes?:  Any potato can be baked, but for the perfect baked potato with the desired flaky texture, it is recommended that mature, baking-type potatoes such as the Russet potatoes be used.  Russets are known as a starchy potato, a baking potato, or a mealy potato.  The starch gives the potato it’s characteristic fluffiness.  When you’re in the mood for a good, classic baked potato, it’s Russet Potatoes. 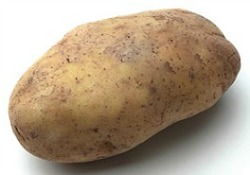 Important:  Make sure that the skin of your potatoes has a nice even brown tone without a greenish cast.  Inspect the potatoes thoroughly to make sure that there are not any significant bruises, discolored spots, or sprouts.

A sprout of any size can be toxic, but you would have to eat many sprouts to get sick.  Do not buy potatoes if they have sprouted or have a green tint to the skin. The same is true for potatoes that turn a greenish hue.  A potato in this condition is “light-struck” which causes a build-up of a chemical called Solanine.  This is a natural reaction to the potato being exposed to too much light.  The green part, if eaten in large quantity, can cause illness.

When baking a lot of potatoes at one time, choose potatoes with uniform shapes and sizes; they will cook more evenly and get done at the same time.

Check out Linda’s Potato Hints, Tips, and Information, and The History and Legends of Potatoes.

Conventional or Regular Oven:
(about 5 ounces, medium-sized potatoes, or 150 grams each)

Place the potato directly on the oven rack in a preheated oven.  Place a baking sheet (I put a piece of aluminum foil) on the lower rack (below the potatoes) to catch any drippings.

Convection Oven:
(about 5 ounces, medium-sized potatoes or 150 grams each)

The general rule is to decrease your oven temperature at least 25 degrees lower than a regular oven.

You now have a perfect baked potato – All you need to do is load it with your favorite toppings and enjoy!

It’s hard to think of eating a juicy steak without a baked potato.  These two foods go hand in hand.

Learn how to Cook the Perfect Steak. 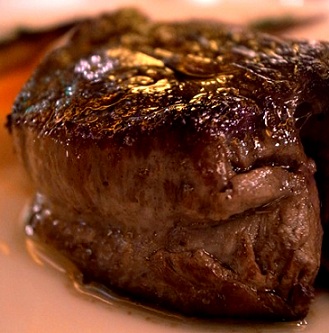 I’m a good cook.  A while back I was looking for alternate baking times for potatoes so I could synchronize with other oven dishes.  Your tutorial – it’s that good – on baking potatoes nailed the subject.  I used to be a tech writer years ago.  Your informative, tight, and expert writing is about as good as it gets.  Thanks.- Jack Labusch, Niles, Ohio (10/16/14)

I had never made a baked potato before.  I remember the ones my mother used to cook when I was a kid being really dry but I wanted to make one, so I googled it and found your site.  My baked potatoes were delicious and I have you to thank for it.  They’re now a regular staple in my ever-burgeoning cooking repertoire.  Thank you so much.  I so appreciate a recipe that turns out beautifully. – Diane (12/20/13)

I was just looking online at new ways to bake a potato AND I SAW YOUR SITE. PERFECT just like you said with no aluminum foil used and salt, pepper, and butter on the outside – perfect cook times.  They were amazing!  I don’t think I came up for air, it was the best baked potato I’ve ever had at home or anywhere else! – from Facebook (10/30/13)

Hi Linda – Your recipe is perfect.  I am a terrible cook and have always assumed you have to wrap a baked potato in Reynolds Wrap.   I have also cooked them at too high a temperature.  I followed your instructions and they turned out perfectly.  You are right – the consistency is totally different.  – Regards Cindy (4/21/13)

I’m 55 years old and tonight I cooked my very first baked potatoes.  I don’t cook much.  I didn’t cook my first chicken until I was 50, the list goes on.  I don’t particularly like baked potatoes but my husband does.  During our 15 year marriage, I did a bake potato for him once a few years ago in the microwave – it was edible.  I think!  Tonight I decided it make him real baked potatoes with his dinner and decided to look up how to do it.  I found your website and followed your directions to the letter (except my husband doesn’t like a lot of salt so after baking with the olive oil and sea salt, I wiped off the sea salt before serving).  He said he could still taste the salt and they were two of the best baked potato’s he has ever eaten.  I didn’t have them but wanted them to be good for him and they were. From a hopeless cook and an American abroad, thank you so much for the Perfect Baked Potato.  Cheers – Karen Harland, Middleton St. George, England.