How To Cook Perfect Fried Eggs

This technique for perfect fried eggs has been adapted from the ultra-meticulous French chef Fernand Point (1897-1955).  His approach involves very gently and slowly cooking the egg to retain its delicate purity.

A technique that is somewhere between frying and poaching in hot butter.  This technique makes spectacular fried eggs and demonstrates that simplicity and purity often yield the best dishes of all. 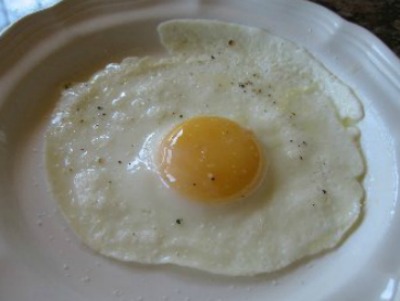 First let’s talk about the perfect fried eggs.  A French technique that very slowly cooks the eggs in butter.  This method was developed by Master French Chef Fernana Point (1897-1955) at his three Michelin Star rated restaurant La Pyramide in the 1950’s.

In the first chapter, Luxe, Calme et Volupt, Chelminski details how Loiseau’s mentor, the infamous Chef Fernand Point would test visiting chefs with a challenge to show him how they fried a simple egg, declaring that the easiest dishes were often the most difficult to prepare.  When, inevitably, the chef insulted the egg with the sizzling hot surface of a frying pan, Point would cry, “Stop, unhappy man – you are making a dog’s bed of it!”  And then he would proceed to demonstrate the one and only civilized manner of treating an egg.  Very slowly, very gently, and swimming in butter of course.

Place a lump of fresh butter in a pan or egg dish and let it melt – that is, just enough for it to spread, and never, of course, to crackle or sit; open a very fresh egg onto a small plate or saucer and slide it carefully into the pan; cook it on heat so low that the white barely turns creamy, and the yolk becomes hot but remains liquid; in a separate saucepan, melt another lump of fresh butter; remove the egg onto a lightly heated serving plate; salt it and pepper it, then very gently pour this fresh, warm butter over it. – Fernand Point

Now for the modern version (rather my version) of the above French technique or recipe by French chef Fernand Point:

* Use the freshest and best eggs you can find.  When frying more than one egg at a time, add eggs all at once.  Crack eggs into small bowls and add them to the skillet.

Baked or Shirred Eggs
In France, this basic methods of baked eggs is called oeufs en cocotte.  People love this dish.  Baked eggs are both comforting and sophisticated.  The eggs come out looking beautiful in their individual ramekins and are easy to serve.
Coddled Eggs

Coddled eggs are made by very briefly immersing an egg in the shell in boiling water (to cook in water just below the boiling point) to slightly cook or coddle them.
Deviled Eggs

Deviled eggs have their roots in ancient Roman recipes.  In the 17th century, this was a common way to prepare eggs.  They were not called “deviled” until the 18th Century, in England.

Poached Eggs
The best eggs for poaching are the freshest eggs you can find.  If eggs are more than a week old, the whites thin out.  Whites of fresh eggs will gather compactly around the yolk, making a rounder, neater shape.

Scrambled Eggs and Omelettes
Scrambled eggs make a delicious and quick meal, but there is a little science to getting them just right.  The secret to successfully scrambling eggs is slow cooking.