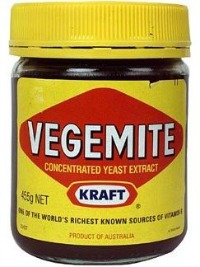 Vegemite is considered as much a part of Australia’s heritage as kangaroos and the Holden cars.  It is actually an Australian obsession that has become a unique and loved symbol of the Australian nation.

Vegemite is one of several yeast extract spreads sold in Australia.  It is made from leftover brewers’ yeast extract (a by-product of beer manufacture) and various vegetable and spice additives.  It is very dark reddish-brown, almost black, in color, and one of the richest sources known of Vitamin B.  It is thick like peanut butter, it is very salty, and it tastes like – well let’s just say that it is an acquired taste!

Australian children are brought up on Vegemite from the time they are babies.  It is said that Australians are known to travel all over the world with at least one small jar of Vegemite in their luggage, for fear that they will not be able to find it.

Want to try Vegemite, you can purchase it here on Amazon.

22.7 million jars of Vegemite are manufactured in Australia every year – that’s 235 jars per minute.

30 jars are sold in Australia for every one exported.

Vegemite is in nine out of ten pantries in Australia.

In 1922, Fred Walker (1884-1935) of Melbourne, Australia decided to try to make a special “yeast extract” that would be as delicious as it was nourishing for his Fred Walker Cheese Company to sell.  The chief scientist in the company Fred owned was Dr. Cyril P. Callister, and it was Dr. Callister who invented the first Vegemite spread.  He used brewer’s yeast and blended the yeast extract with ingredients like celery, onion, salt, and a few secret ingredients to make this paste.

In 1924, a national competition and a prize of 50 pounds was offered to the winner or winners to name the new product.  The name ‘Vegemite’ was finally chosen from the entries by Fred’s daughter Sheilah.

With its unusual and unique flavor, Vegemite was not an immediate success and sales were slow.  In 1928 Vegemite was renamed and registered as Parwill in an attempt to boost its sales and to attract customers of the rival spread Marmite (an English yeast spread that dominated the Australian market since 1910).  “If Marmite…then Parwill” was the rationale behind Walker’s strategy to carve a niche in the market for his spread.  The name Parwill and Walker’s play on words didn’t catch on.  It was only sold as Parwill for a short time in Queensland.  The name was withdrawn in 1935, and the original name was reinstated.

Earlier, in 1925, Walker had arranged with the Chicago, Illinois firm of James L. Kraft to make processed cheese in Australia.  A company called the Kraft Walker Cheese Co. was established alongside Fred Walker and Co.  In 1935, Walker used the success of his processed cheese to launch a new campaign to revive Vegemite.  The company launched 2-year coupon redemption scheme whereby a jar of Vegemite was given away with every purchase of other products in the Fred Walker Cheese Company.  Australians tried the product and loved it.  Vegemite was well and truly on the road to success.

Two years later, the company held a poetry competition and once again brought this product into the national spotlight.  This time its success the prizes were imported American Pontiac cars.  Entries flooded in and sales multiplied.

In 1935, the recipe and manufacturing methods was sold to Kraft Foods and has been wholly owned and made by American companies.  In 1939, the product received endorsement from the British Medical Association which allowed doctors to recommend it as a Vitamin B-rich, nutritionally balanced food for patients.

In World War II, soldiers, sailors, and the civilian population of Australia all had Vegemite included in their rations.  Soldiers’ Vegemite came in three sizes: seven-pound tins for the platoon, eight-ounce tins for soldiers on the go, and half-ounce rations for behind enemy lines.  This war-time demand meant that civilian were limited.  Hence, advertisements were run to explain the situation:

Vegemite fights with the men up north!  If you are one of those who don’t need Vegemite medicinally, then thousands of invalids are asking you to deny yourself of it for the time being.

The main change to the original recipe in recent years has been to reduce the salt content from 10% to 8%.

Vegemite’s rise to popularity was helped by the marketing campaigns written by J. Walter Thompson advertising in 1954.  They used groups of smiling, attractive healthy children singing a catchy The Happy Little Vegemite Song (see below).  The song was first aired on radio in 1954 and then on television in 1956.  This advertising campaign continued until the late 1960s.

We are happy little Vegemites as bright as bright can be,

We all enjoy our Vegemite for breakfast, lunch and tea,

Because we love our Vegemite,

We all adore our Vegemite,

It puts a rose in every cheek!

Your explanation is mostly fine, but some of us like a fair coating of the stuff, not just a scrape.I’ll eat it out of the jar!But one of the most useful tips to give any cook, is how it can save an anemic gravy: When a gravy lacks colour or flavour, a quarter to a half teaspoon or so always saves the day.Young-uns often wonder why my gravy is always so good; and if they’re nice, I let them in on the secret that my Grandma told me.Funny to think my family has used a product since it was invented.Thanks for the history lesson, and try Vegemite in your gravy, you’ll love it!

You might like to know that when the company sold overseas, it was cause for national concern…everybody was outraged, and worried that “the Yanks would stuff-it-up”.People were ringing radio stations calling for the government to stop the sale.Private citizens were trying to raise funds to make a counter offer…you wouldn’t believe the furor it created.

Another favourite use of my Mum’s, when she felt run-down, was vegemite ‘soup’;just a teaspoon of vegemite in boiling water.I used to like thinly sliced raw cabbage, garlic and vegemite sandwiches. Sounds terrible, but very healthy and yummy. Every kid in Australia ate Vegemite on SAO biscuits; often with tomato, and, or cheese.This combo is particularly yummy grilled as an open sandwich with Kraft sliced cheese (the way it bubbles up and browns-off…yum!).

I’m an easy going old bloke, and I have a young lodger who gets away with murder because I “don’t give a rats” about money or anything – you could hit me with a cricket bat and I’d blink at you, LOL – anyway, he used the last of the Vegemite the other month.God he was lucky I didn’t rip his head off – LOL.Now I keep an emergency jar hidden away for myself, just in case.

Growing-up, only ‘pommies and wankers’ ate marmite.I still haven’t tasted it (excuse the language).We all agreed the best pies were “Sergeants pies,” though we’d eat”Four and Twenty” if that was all we could get.People argued about Ford and Holden; and we’re still arguing about which code of football is best…but apart from cricket, vegemite is one of the great unifying forces – no matter your politics or standing in life, we all love our Vegemite.

What ever you do, don’t muck with the recipe too much, or you can forget about being allies.LOL.It was a national tragedy the day that Sergeants stopped baking pies.People went around buying-up the last run, and freezing them.It was very sad I remember.We mourned their passing for years, quite literally.The new ones are ok, but not a patch on the original.Aussies used to have them flown overseas when touring.It’s the highest praise for a pie to say it’s almost as good as a Sergeants.

40 Responses to “Vegemite History and Recipe”