Some people consider Beef on Weck (thinly sliced slow-roasted rare roast beef piled as high as 6 inches) on a freshly baked kummelweck roll, the Best Roast Beef Sandwich in America.  Also called Beef on Wick, an alternative spelling usually used by older people from Buffalo and eastern suburbanites.  Few, if any, restaurants outside the Buffalo area serve this sandwich or even know what it is. 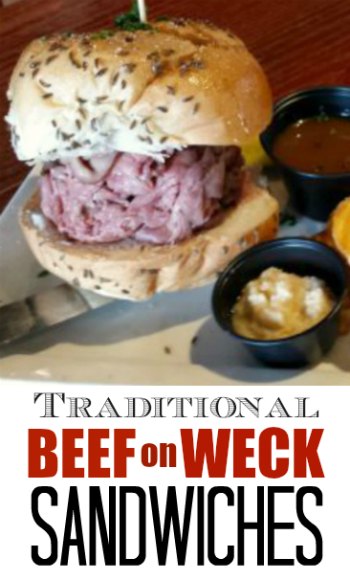 What is a Beef on Weck Sandwich?  It is a roast beef sandwich on a salty kummelweck roll.  In fact, it is this roll that makes the sandwich unique.  Made only in the Buffalo-Rochester area, the kummelweck – often alternatively spelled kimmelweck – is basically a Kaiser roll topped with lots of pretzel salt and caraway seeds.  Kummelweck is simply shortened to “weck.”  The sandwich is usually served with sinus-clearing horseradish (you can tell a native Buffalonian by the amount of horseradish he or she used), a couple of huge kosher dill pickle slices on the side, and extra beef juice served straight from the roast.  Wash it all down with a cold, locally brewed ale.

1901 – The following family history of the origin of the Beef on Weck sandwich was shared with me by John Guenther, great grandson of Joe Gohn, originator of the Beef on Weck Sandwich.  Some of the information also comes from the Buffalo Courier Express newspaper, April 6, 1980:

Just before the start of the 1901 Pan American Exposition in Buffalo, NY, Joe Gohn (1862-1949) purchased a small saloon which he called the Delaware house, located at Delaware and Delavan Streets.  The Delaware House was located on the northwest corner across the street from one of the exposition’s main entrances.  He enlarged the house to offer hotel-style rooms for the exposition travelers.  It was never called a hotel, but in order to have a whiskey license, he had to have ten bedrooms and provide sitting rooms for his customers.

According to family history, street trolleys loaded with people headed for the exposition were let off near the veranda of the John Gohn’s Delaware House.  Since Joe had turned his house into a hotel and tavern to house and feed the hungry people, he decided that a roast beef sandwich and a cold beer would taste good to these travelers.  Joe had a German baker working for him who was already making the rolls for the Delaware House.  This baker, name unknown, suggested adding the caraway seeds and salt to the top of the rolls as they did in Germany.  In Germany, this type of roll was called a kummelweck with nickname of weck.  These sandwiches soon became very popular, and of course, the kummelweck helped to create extra thirsty patrons for selling a lot of beer.

The original Delaware House was purchased by the Standard Oil Company in 1931.  It was later razed and a has a gas station on the site.  Joe Gohn then purchased the building next door and converted it into a tavern, called Gohn’s Tavern.  He continued serving his now famous Beef on Weck sandwiches.  In later years, he sold the tavern and it became Meyer’s Tavern, which for many years continued selling the Beef on Weck sandwich with great popularity.
It is commonly believed by some historians that William Wahr, a German baker, brought the kummelweck to Buffalo from the Black Forest.  There is no historical evidence to back this claim up, but could this be the name of the baker who worked for Joe Gohn at the Delaware House?

I just found the recipes that are from Buffalo.  I have only seen a couple Beef on Weck recipes and none of them looked right.  Your recipe above looks dead on! I have not personally made them from scratch, but I know a local butcher who makes them.  One of the few I saw called for you to brush the roll with water or egg white for the salt and caraway, and one thing we know for sure is they have the cornstarch glaze. – Lisa H, Lockport, NY (6/19/11)

Here in the Erie PA area there are a few local delicacies found only here.  The local version of Beef on Wick is called Ox Roast.  It is virtually the same except that the roll is plain (sometimes only thick slices of home made bread) but the cooked in an overnight outdoor roaster made of corrugated steel.  The story on the Ox Roast is that it was brought by the railroad workers.  Erie was the hub of east-west, north-south railroads back in the day.  The story is the guys building the railroads used this method to feed the workers.  During my boyhood all town fairs, carnivals etc. included the firemen sponsoring an “OX Roast”. – Jim (12/15/05)

64 Responses to “Beef on Weck Sandwich History and Recipe”