Learn how to make homemade Italian pistachio gelato and transport yourself to the streets of Italy with each bite! 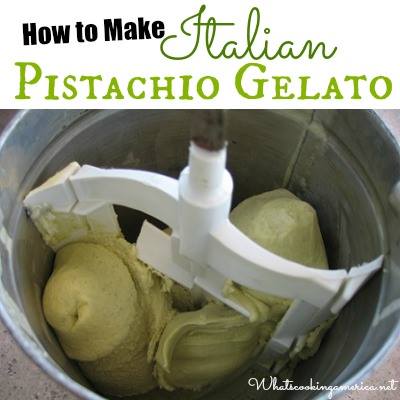 Italian Pistachio Gelato recipe and photos are being shared by my daughter, Nancy Hartman of Portland, Oregon.  Check out Nancy’s article Italian Gelato – One Day I Walked Into A Gelateria.

Nancy says, “I was having fond memories of Italy today and decided to try my hand at my favorite gelato – Pistachio Gelato!  I searched the web for an authentic Italian Gelato recipe, and there are not a lot out there.  I found one to try, I played around with, and it turned out great!

When in Italy, I also learned that one of the main differences in gelato is in the preparation.  Gelato is made in a custard form first, heating it up, and then allowing it to cool down so that the milk proteins bind.  This produces the smaller ice crystals and delicate flavor that differentiates it from ice cream.  Gelato is definitely one of Italy’s great culinary creations!

My son, Christopher, prefers Chocolate Ice Cream, so it was decided we needed to make both kinds in case he did not like this Pistachio Gelato.  So we might as well double each so we have a lot of both – so we did!”

*** Regular granulated sugar may be substituted.