My family loves these wonderful German Beef Roulades.  We call them King of Meats!

Every major event in our family, calls for the preparation of King of Meats and German Creamed Spinach.  This was a very hard recipe for me to try and write down, as we just buy the ingredients and put it together – the more steak you buy, the more other ingredients you will need.

The original German Beef Rouladen recipe is from my children’s Grandmother, Gertrude Zemp.  This is how she taught me to make rouladens.  Roulades are also know as Rinderrouladen and German beef rolls.

I have had readers say that this recipe is not a true German Rouladen because there are no dill pickles in it.  Well, Gertrude learned to make rouladens from her mother in Germany.  Just like in the United States, different regions of Germany have their own variations of roulades. 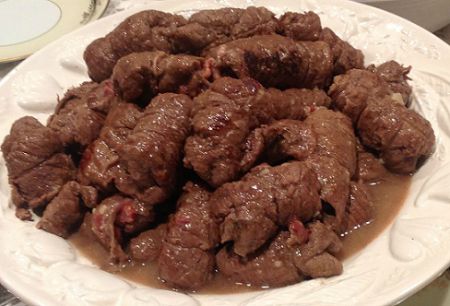 As you can see from this photo, our family really loves these Beef Rouladens.  I always have to make a very large batch for the family.  Unfortunately they do look like burned turds when cooked, but regardless of the look, they taste like heaven!

* You can also substitute flank steak.

I would so like to comment that this recipe does not have pickles or mustard.  Our family does it both ways.  My Aunt in Hamburg uses mustard and no pickles.  My mom, who was a professional cook for a manor in Germany, used NO pickles and no mustard.  Others in Germany use both.  Personally I prefer my Mother’s recipe, as the broth she used was the key.  The broth was made from scratch with beef bones.  I use neck bones(or even oxtails), and lots of leeks, onion, celery root, and carrots.  The more Fragrant the broth, the better the sauce.  We chop onion and raw bacon and put as much of the onion and bacon in the middle as is possible.  We omit the wine from the sauce, but that would be an interesting twist. – Gerda Siewert (8/24/08)

I made rouladens tonight and was amazed at your recipe being just like my mothers.  She was born in Germany and came to the U.S.A. in 1928.  It certainly brought tears to my eyes seeing your recipe, exactly like my mom made it.  My mother never used pickles either.  I believe the Polish used pickles in their beef roll ups.  My mother in law is Polish and by the way is 97 years young.  She always makes her roll ups with the pickle.  Thank you for sharing a wonderful German recipe! – Dolores (10/20/06)

My birthday is tomorrow and my daughter and her hubby are coming into town.  Since I live alone and HAVE to cook for myself to cook for others is a JOY!  So I was browsing to get some different ideas.  I came upon your Rouladen recipe….TIME WARP!!!  I haven’t thought about or tasted them since I was a kid!  I never knew the name of them, but it’s the very same that I had as a child (both sides of grandparents were German).  This is A MUST!!  I’ve never made this for my kids, as I said I had totally forgotten about it, so it will be a new experience for my daughter, and since my grandparents AND parents have since passed on and it will be MY birthday…I’m going to have some good old COMFORT FOOD!  Thank you for the idea!!!!!!  Also doing the garlic mashed potatoes and the creamed spinach.  Thanks again! – Linda (1/05/07)

I was amazed to find this recipe on line!  My hard drive crashed and died, and among the forever-lost files was my mother’s recipe, which she got from my German grandmother – and definitely no pickles or mustard.  It’s almost exactly identical with what I remember.  It also had a name of unknown origin/spelling – something like “Sirossi”  which is how we still refer to it.  The only difference is my mother would have the butcher slice 1/4-inch slices of top round and didn’t pound the meat.  I think she might have cooked the bacon first, too.  My grandmother died in 1945, and now my mother is gone now, so am very happy this particular version lives on. – Joelle (3/04/07)