Hair of the dog?  Maybe you’re just looking for a great brunch cocktail or trying to impress the bacon addicts with something new.  Try a Bacon Bloody Mary!

It is easy to add this variation to your mixologist repertoire by using Bacon Infused Vodka.  If you can not find Bacon Infused Vodka on the shelf – make it yourself by following these easy instructions below.  Infusing the vodka is very easy to do.  This would be a fun rainy day project for you and your friends.

In 1921, an American bartender in Paris, Fernand “Pete” Petiot, mixed up some vodka and tomato juice.  According to legend, Petiot said,“  It was suggested we call the drink ‘Bloody Mary’ because it reminded him of the Bucket of Blood Club in Chicago, and a girl there named Mary.”   In 1934, Petiot brought the drink to the King Cole Bar at the St. Regis Hotel in New York.  It was in New York that he added pepper, Worcestershire sauce, Tabasco, lemon, lime, and horseradish.  Petiot pushed his tomato-based drink as a hangover cure.

Born the Bucket of Blood, this drink was later called Red Snapper and Morning Glory before finally being christened Bloody Mary, supposedly after American entertainer, George Jessel, accidentally spilled one of these crimson beverages over a young woman named Mary. 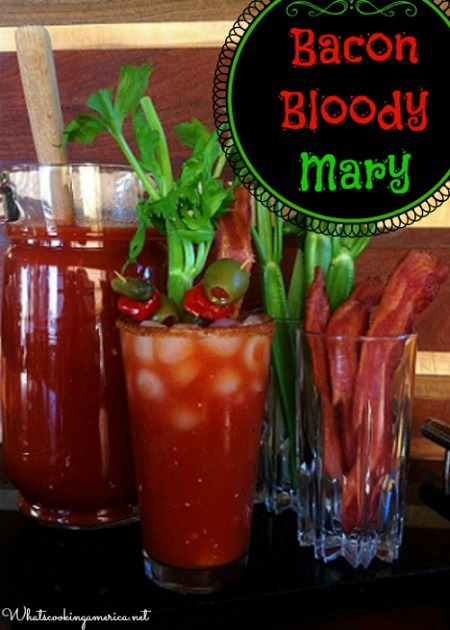 * The is not the exact amount of vodka used as the bacon takes up some of the volume.  Save the remaining vodka or another use, or drink it if you are so inclined.

** Either fry or oven-bake your bacon strips.  Learn how to Oven-Baked Bacon - Perfect Baked Bacon (this is my favorite way of cooking bacon - no mess).