The Buffalo chicken wing can be considered a true All-American blue collar dish.  It’s origins coming from the city of Buffalo, New York, with a high density of blue collar workers and using what was once considered the cheapest part of the chicken. 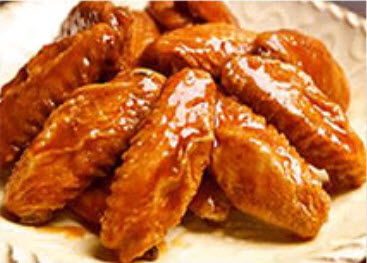 Buffalo natives will tell you, there is really only one way to eat a Buffalo Chicken Wing – and mild and medium are not an option!  Eat them hot and wash it down with a nice cold beer.

Chicken wings used to be considered the least desirable part of the chicken.  Many chefs would throw the wings away when cooking chicken or throw them into the stock pot to use for soup bones.  Now there is so much popularity around chicken wings, they have become the most expensive part of the chicken to buy, especially when the Superbowl comes around!  There are even rumors that annually sweep the news during Superbowl season about wing shortages in the grocery stores.

1964 – Young had heard of a restaurant in Washington D.C. that served chicken wings, so he decided to open his own establishment with his take of wings which he served in his popular Jamaican “Mambo” sauce.

Young, states he has been selling chicken wings since 1963. He operated various restaurants in the area until he opened Wings and Things at 1313 Jefferson Ave. at Utica

During the race riots in the late 60’s and early 70’s Young and his family left NY for Decatur, Illinois, where he ran a food truck until he returned to Buffalo in the 80’s, opening several Wings and Things locations in the Buffalo area.

Although there are several people who claim invention of Buffalo wings, Young’s Wing’s and Things restaurant should also be considered in the history of the origin of Buffalo Chicken Wings. Wings and Things rival restaurant, the Anchor Bar in Buffalo also starts their history of Buffalo Chicken Wings in 1964. Young does say that the Anchor bar wasthe first to cut the wings in half and serve them with celery and blue cheese dressing, but the original concept of selling the wings was his.

There is much mystery on the exact story of how buffalo wings came about, but we do know for sure the recipe originated at the Anchor Bar in Buffalo, New York by restaurant proprietor Teresa Bellissimo in 1964.  Teresa deep fried the wings without breading to cook them and then coated the wings with hot sauce made from a base of vinegar, butter and cayenne peppers.  They were served with celery sticks and blue cheese dressing as a nice counterpoint to cool off your mouth from the heat of the hot sauce on the wings.

Story 1:  According to Teresa’s husband, Frank, who founded the bar with Teresa in 1939, the recipe came about out of necessity.  The restaurant was accidentally delivered chicken wings instead of necks in their delivery order.  Since they didn’t want the wings to go to waste, Frank asked his wife to come up with a bar appetizer and thus the creation of the buffalo wings.

Story 2:  Teresa’s son Dominic retells the following story.  On a late Friday night Dominic wanted to provide a special free appetizer for some regular customers who were spending alot of money at the bar that night. Typically on Friday’s most Roman Catholics stick to the tradition of eating fish and vegetables.  Dominic wanted to provide some kind of meat appetizer to pass around at midnight. He asked his mother to come up with something to serve.  That’s when Teresa picked up the chicken wings and concocted her recipe.  It wasn’t long until the wings were added to their regular dinner menu instead of serving as a free bar food.

According to one employee of the Anchor Bar’s, “It took a few years before Buffalo wings became popular.  At first customers were not so hot on the idea of paying for chicken scraps.”  Soon enough the the wings were becoming more popular than the regular Italian food on the menu.  During the 70’s, the popularity of the Buffalo wings took off and spread across the city and then bars across the state of New York.  It was in the 1980’s and 90’s that Buffalo wings gained nationally popularity in major restaurant chains and became a favorite snack to serve during the Superbowl.  Now days buffalo chicken wings are so popular that you will find chicken wings offered in a variety of sauce flavors other than the original hot sauce.

The actual recipe for the Anchor Bar’s Buffalo Chicken Wings is kept a closely guarded secret by the family, but you will find that the following Buffalo Chicken Wings recipe tastes a lot like theirs.  During football season, Buffalo Chicken Wings are probably the most served appetizer during the game!  The are known by Buffalo natives as “wings”, and many restaurants will offer wings on the menu as mild, medium or hot.
1970’s – Buffalo wings were offered on bar menu across the city and popularity spread state wide.  City of Buffalo officially proclaimed, July 29th as “Chicken Wing Day”

1980’s – Buffalo wings became nationally famous as restaurant chains like Hooter’s and Buffalo Wild Wings featured wings as a main item on the menu.  It is believed that the first mention of Buffalo wings on national television was the Today show.

1991-1994 – Buffalo Bills, NFL football team appeared in the Superbowl 4 consecutive years in a row, bringing much media attention to the cuisine of Buffalo, New York.
Major pizza chains such as Domino’s and Pizza Hut started featuring Buffalo wings as part of their regular menu offering.

I just found the recipe that are from Buffalo on your website.  I am impressed!  I live near Buffalo and you have them right on.  Most places call any orange-colored spicy chicken “Buffalo” and it drives me and others nuts.  The authentic wings are fried in vegetable oil.  Some recipes add flour to the wings.  I also saw some recipes that call for them to be baked in the oven.  Even Bisquick covered!  These recipes claims they are Buffalo! – Lisa H, Lockport, NY (6/19/11)