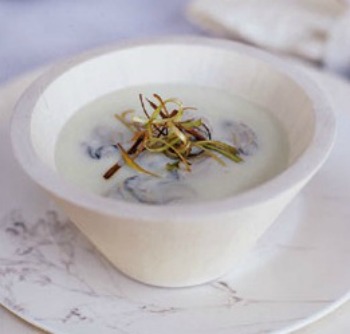 * Cut and clean leeks:  You need to thoroughly clean a leek because dirt can become trapped in its many layers.  Trim the root portion right above the base (cutting too far up the stalk will remove the part that holds the layers together.  Slice off the fibrous green tops, leaving only the white-to-light green stalk.  Discard greens.  Cut the leek in half lengthwise, then cut according to your recipe (slice, chop or dice).  For this recipe, cut the leeks into 2-inch lengths.

** Only use small oysters, 1 to 1/2 inches in diameter in this recipe.  Larger ones will make the flavor too briny.  How To Shuck Oysters.