One taste of this Cornell Chicken recipe and you will definitely know why it is so popular. My husband loves it! This delicious chicken is served everywhere in New York state, especially during the outdoor grilling season. During the New York State Fair, which takes place each summer in Syracuse, it is said that over 5,000 Cornell Chickens are consumed, marking it as the unofficial food of the event.

History of Cornell Chicken: In 1946, Baker researched and developed innovative ways to use poultry. This Cornell Chicken Barbecue Sauce recipe has stood the taste test of time, having been showcased for more than five decades at his Baker’s Chicken Coop at the New York State Fair in Syracuse, N.Y. Baker developed the recipe while working for Pennsylvania State University, but the barbecue sauce he devised was not appreciated until he joined the Cornell faculty with a mandate to promote New York state’s poultry industry. This recipe is considered a central New York state regional food and if often referred to as “State Fair Chicken.”

According to the Lansing Star Online Newspaper:

Each year the Bakers set up shop in a big red building with covered seating on either side where customers line up for chicken dinners, wings, salt potatoes, salads and a whole menu of delicious choices. The smell of chicken is irresistible as you walk by and it is hard not to go in and get a plate of chicken.

The tradition was begun 56 years ago by Bob Baker, a retired Cornell professor, and his wife Jackie. Dr. Baker is known for inventing “Cornell Sauce,” a marinade for chicken. They ran the restaurant until 1988, when their daughter Renee Sandsted took it over.

1999 – President Bill Clinton, Hillary Rodham Clinton, and their daughter, Chelsea, toured the New York State Fair. There they visited Baker’s Chicken Coop eatery, specifically to savor a taste of the famous Cornell Barbecued Chicken. As the first family arrived at the barbecue stand, one of Baker’s daughters presented the Clintons with a basket of New York state apples. “Those apples look good, but where’s the chicken?” the president asked. 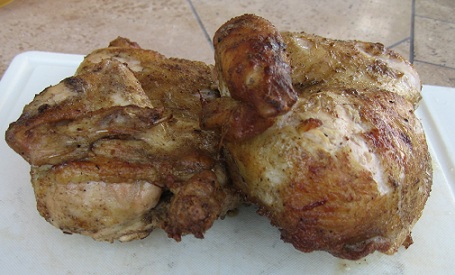 According to Robert Baker, “Barbecue broilers without sauce are like bread without butter. The barbecue sauce is a basting material. Brush it on the broiler halves every few minutes during cooking.”

* Adjust the quantity of salt to meet individual health needs and taste.  I use less salt than called for in the recipe.  Barbecued chicken basted frequently during cooking will be saltier than chicken that has been lightly basted.