Caramelizing sugar is a term most often applied to melting sugar until it becomes a caramel color liquid.  Caramelized sugar is simply a mixture of sugar and water cooked until it becomes syrupy and darkens, and reaching a temperature from 340 to 350 degrees F.

Learn how easy it is to caramelize sugar for topping your flans, making caramels, and other desserts.  The technique varies on what you are using the caramel for, so care should be taken to note in your recipe what kind of caramel is called for.  For example, the caramel needed for caramel candies is much less cooked than what’s needed for spun sugar.

Always caramelize sugar in small batches, starting with no more than 2 cups of sugar.  The recipe below is for a small batch, as would be needed for a flan.

IMPORTANT: A cook must have enough time to stand right by the pot as the process is going on. 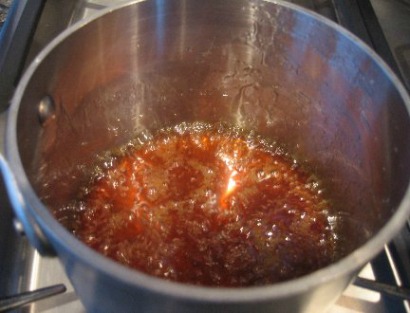 11 Responses to “Caramelizing Sugar Recipe – How To Caramelize Sugar”