Chicken and Dumplings is an easy to make comfort food recipe shared by our family friend, Tacy Parker.  When Tacy serves this dish made in her crockpot, there are never any leftovers! 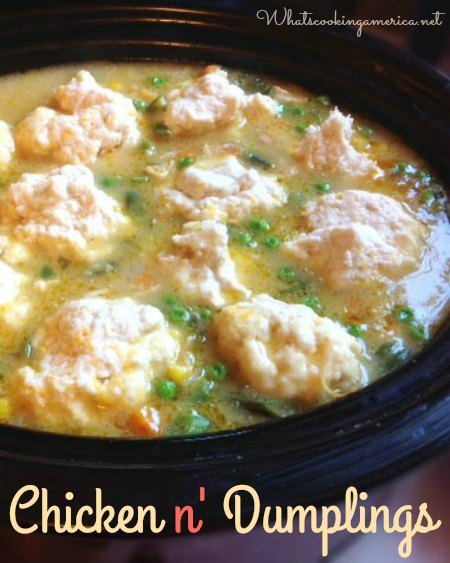 Tacy says, “This Crock Pot Chicken and Dumplings recipe one of my standby camping meals.  When we camp in our trailer, I like to use my crockpot. I love this recipe because it is so simple and it seems to be the top request from my camping buddies.”

It is easy to modify, as well as to add or remove ingredients as you feel like it.  It cooks up like a stew, so cut your veggies into the size of chunks you like best (I like mine pretty hearty).  I have added optional instructions if you prefer to make homemade creamed soup and biscuits.

Chicken and Dumpings gets it’s origins from the South, going all the way back to the Civil War years during the 1860’s. Being cut off from imported goods in the North, food was scarce for both plantation owners and poor farmers.  Out of necessity, a whole chicken could be stretched into two meals when made with either drop biscuits or thick noodle style dumplings. Chicken and Dumplings have remained well loved and became a popular Southern Sunday dinner during the 19th century. Chicken and Dumplings came back into food-stretching necessity again in the South during the 1930’s depression era when hard economic times hit again.

** Can substitute Johnny’s Seasoning for Salt and Pepper.

*** To make your own dumplings, mix 2 cups Bisquick baking mix with 2/3 cups of milk.  Stir together until combined.  If needed, add a little extra milk for dough to clump together and be slightly tacky to touch.  Makes about 10 dumplings.