A good bottle of wine, salad, and bread are all you need to make a terrific dinner with this wonderful Seafood Paella.  Spanish Mixed Paella is the perfect party dish because it is a one-pot meal and because it feeds a crowd.

Spanish Mixed Paella is meant to show off the rice itself and to highlight a few special ingredients.  These ingredients can be vegetables, fish, shellfish or meat.  Any seafood you desire may be used in the Paella.  Delete or add seafood of your choice. The amounts of the ingredients are relative and it does not matter if you use more of one and less of another or chose not to use some at all.  The vital thing is the preparation of the rice so that it comes out loose.

You will need a somewhat deep cooking dish, large cast-iron skillet, or the traditional Paella Pan (paellera – a round flat pan with two handles).  The size of the dish or pan depends on the number of portions you wish to make.

Please check out my Spanish Paella Dinner Menu (with recipes) using this delicious Spanish Mixed Paella recipe.  Also read all about our Travels in Andalusia, Spain.

I adapted this Paella recipe by Chef Brandon Frohne, an award winning 4th generation Chef and Winery Chef at the acclaimed Chateau an Winery and Resort in Braselton, Ga. 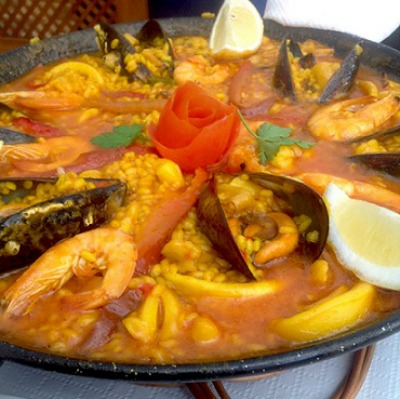 According to Penelopee Casas, from her book, Paella – Spectacular Rice Dishes From Spain:

The word “paella” comes from the Latin word “patella,” meaning pan (in which they cook and by their cooking method).  The only indispensable ingredients in making paella are rice, water, and olive oil.  Everything else is the subject of endless debates and discussions by Spaniards, who love a lively discussion and consider their own recipe the one and only.

Spanish paella is a spectacular dish with a rich history.  It originates from a region of Spain called Valencia, which is in Eastern Spain.  Today, paella can be found in most seaport cities of Spain. Every Spanish cook claims to make the best paella in the country.

The most popular story of paella’s origins is that servants would take the leftovers from Moorish royal banquets and cook them up over open fires into delicious dishes they would take home to their families.  It is though that the word “paella” may come from the Arab word “baqiyah”, which means “leftovers”.  It is also thought that the word “paella” is derived from a Latin word “patella”, which was a flat plate used for religious offerings made to gods.  Since seafood was rare in the city of Valencia, they used chicken, rabbit, duck, and snails in their paella.  Paella is said to be a perfect union between two cultures from Spain (the Romans for the pan and the Arabs that brought rice).

Paella gained popularity in the mid-20th century when paella became a popular dish served to laborers.  The workers would gather midday to combine their leftovers with rice and cook over an open fire.  It is believed that most paella dishes at the time consisted of snails and whatever vegetables the workers could scrounge up, and meats like chicken or rabbit were only added for special occasions.

* If you have some fish or seafood stock, substitute it for part of the chicken stock.

** I do not always add the chicken, because I add a large amount of seafood.

*** Paprika is an especially important addition to most paellas.  Do make an effort to buy Spanish smoked paprika.

**** Since clams and mussels are cooked directly in the rice, they must first be purged of grit by soaking them in water.  Scrub the clams and mussels and rinse well.  Then place in a bowl of salted water to cover.  Sprinkle with about 1 tablespoon cornmeal or bread crumbs and then refrigerate several hours or overnight.  Rinse well before using.

If the paella is almost al dente and ready to be removed from the oven, but still seems to have liquid, return it to the top of the stove over high heat.  Without stirring, heat until the liquid has evaporated.  Then remove from heat and cover the rice and let it rest before serving.

If the paella seems dry before the rice is almost al dente, sprinkle with a few tablespoons of water and allow to cook in the oven 2 to 3 minutes longer.  Then remove from oven and cover the rice and let it rest before serving.

Introduction to Paella, The History of Paella and Paella Today, by Damian Corrigan.

History and Orgins of Paella, The Paella Company.