Several years ago my daughter Brenda’s dear friend Lena Hennegan, from Russia, hosted a dinner party and served everyone borscht soup as one of the courses.  She enjoyed the flavors of the soup so much that she had to ask for Lena’s recipe.  Brenda just recently uncovered the recipe tucked inside one of her cookbooks.  The recipe was labeled Ukrainian Borsht Soup Recipe.

With this cold weather, this hearty Ukrainian Borscht Soup is delightful.  Looking at the ingredients it reminded my daughter of a variation of vegetable beef soup that also added cabbage and beets for that beautiful deep ruby color.  Brenda says, “Not only did this soup fill my family up, but it was also very healthy and the taste improved the next day.  I was surprised to see my young boys enjoying the soup.  My 5-year old liked the fact that he could not tell what kind of vegetables were in the soup, and he declared it tasty!” 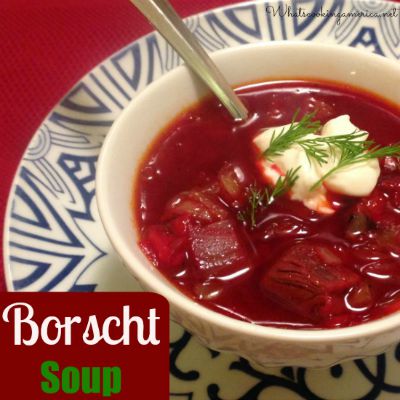 Borscht soup also spelled, borsch, borshch, barzcz, or borchch is a characteristically red colored clear soup, which comes from the beetroot and can be served hot or cold.  Borscht is a specialty of the Eastern European (Slavic) countries (including Russia, Lithuania, Poland, and Ukraine) that dates all the way back to Medieval times.  It is also believed that borscht used to be the national food in Ancient Rome, where cabbages and beets were specifically cultivated for the purpose.

In the Slavic countries, the origins of borscht actually used cow parsnip, which was eventually replaced by the beetroot. Since beets were in large abundance and inexpensive, it was frequently used by the poorer classes.  During the Middle Ages, Borscht never appeared on the royal table during the reign of the Jagiellonian kings, or was it consumed by the royal servants.

Ukrainians strongly believe that Borscht soup originated in their country and declare it as their national soup.  Ukrainians love borsht so much so that they will eat borscht with pork for breakfast as a morning pick me up and then again three times throughout the day!  You can find many different variations of Borscht soup in the Ukraine using a wide range of vegetables including the staples of cabbage, potatoes, and meats such as pork, beef, or ham.  The most essential ingredient for the soup is the beetroot which gives the soup it’s red color.  The sweetness from the beets is typically counterbalanced with a kvass (sour, slightly alcoholic beer made from bread or a concoction of fermented beets) vinegar, lemon juice or a citric acid.  Borscht is often eaten with a garnish of sour cream and fresh greens such as dill weed or parsley.  Borscht is commonly prepared in a large pot to feed a family for several days and the taste will continue to get better after the first day. There as so many recipe variations for borscht soup that each family passes down through the generations.

15th Century – One of the popular but unproved legends says the first-ever borshch was cooked by the Cossacks in 1637 during a two-month siege of the Azov fortress in Southern Russia, which was occupied by the Turkish army.  Feeding four thousand Cossacks in a camp was problematic so they collected anything edible they could find and threw it all together.  Everyone liked this thick and nourishing mix of vegetables and meat, and came up with the name borschch.

16th Century – Famous Polish poet and prose writer, Mikolaj Rej mentioned a “broth from pickles beets”, but is was not known in all parts of Poland.

31. Ukranian borshch (Borshch malorossijskij):  Prepare bouillon #1 from 3 lbs of fatty beef or fresh pork, or from beef with smoked ham.  Omit the root vegetables, but add a bay leaf and allspice.  Strain the bouillon. An hour before serving add a little fresh cabbage, cut into pieces.  Cook, stirring in beet brine or grain kvass to taste about 2 spoons of vinegar.  Meanwhile thoroughly wash and boil 5 red beets, but do not peel or cut them; this is, boil them separately in water without scraping.  Remove them when tender, peel, and grate.  Stir 1 spoon of flour into the beets, add them to the bouillon with some salt, and bring to a boil twice.  Put parsley in a soup tureen and pour in the hot borshch.  Add salt to taste. Sprinkle with black pepper, if desired, and serve with the sliced beef, pork , or ham; or with fried sausages, meatballs or mushroom buns. “ — Classic Russian Cooking: Elena Molokhovets’ A Gift to Young Housewives (originally published in 1861) translated and introduced by Joyce Toomre [Indiana University Press: Bloomington] 1992 (p.131)

Food and Drink in Medieval Poland: Rediscovering a Cuisine of the Past, Maria Dembinska, revised and adapted by William Woys Weaver, translated by Magdalena Thomas [University of Pennsylvania Press: Philadelphia] 1999 (p.127-128)

* Can used cubed stew meat or beef chuck cut in cubes, but you will get better flavor including some beef or pork bones.