Pin494
Share1K
Tweet
Yum1
Email
Since this Mashed Potato Candy recipe is an unique and unusual recipe, I thought everyone would enjoy seeing it and perhaps making them.  This is also a great recipe to use up extra mashed potatoes. 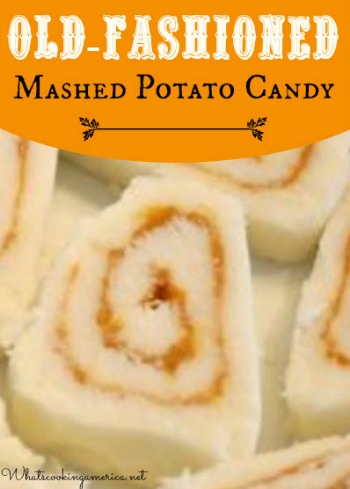 No one will guess that you have used mashed potatoes in this recipe, unless you tell them!  Mashed Potato Candy is an old family recipe that has been passed down for generations.
Also learn how to make Mashed Potato Fudge – This candy taste kind of like Almond Joy (Mounds Bar) candy bars, but without the almonds.

It is difficult to find written documentation or early cookbooks on the history of potato candy.  Most people that remember this candy as a child recall the recipe being passed down from Grandparents and Great Grandparents of German or Irish descent.  Many believe the recipe to be introduced by the Pennsylvania Dutch.  A common frugal German practice was to find delicious food uses for leftover potatoes.

The most popular recipe version is a rolled candy with a sweet filling in the center where other versions cut the candy into small squares or rolled them into balls. Different fillings that were used range from chopped nuts, candied cherries, coconut or chocolate.  Sometimes coloring is added to the potato dough for festive holiday colors.

It was during the depression era in the United States that potato candy grew in popularity where cooks had to learn to be resourceful with less expensive ingredients.  The addition of peanut butter filling is definitely an American tradition introduced during this time.  “All the ingredients were easy and cheap to come by even during the dust bowl, which left most other crops devastated.  Peanuts and potatoes tolerate and even replenish harsher soils’ nutrients and powdered sugar is cheaper than pure sugar.  It was the ideal sweet for a bitter set of years.”

Boil or bake potato until well done, and force through a coarse sieve or a potato ricer.  There should be half a cup of potato.  To this add sugar, cocoanut, and vanilla, working together until well mixed.  Press one inch thick into small bread pan, and spread top with a thin layer of melted bitter chocolate or sweet chocolate.  When chocolate is firm, cut in small squares.  This can be varied by using nuts or fruits instead of cocoanut.”

1 baked potato Confectioners’ sugar Vanilla Melted chocolate.  As soon as the potato is baked, warm a mixing bowl and scoop the potato from its skin.  Mash and add confectioners’ sugar, stirring and adding until mixture can be kneaded with the hands.  Knead well, keeping warm, add vanilla and form into small balls. Dip quickly into melted chocolate kept warm over hot water and drop on waxed paper.  Or shape like Easter eggs and dip.  Potato balls can be flattened and topped with English walnut halves, the mixture can be used to stuff dates, which are then rolled in sugar, or it can be rolled out like dough, spread with peanut butter, rolled up and sliced, then dipped in coconut.

* Learn how to make Perfect Mashed Potatoes.  You can also use instant mashed potatoes to make this candy.

** Potatoes are different sizes.  If you end up with more potato, you will need more confectioner's sugar.