A Colorful History of Quinoa:

Check out all of Charlotte Bradley’s Healthy Lifestyles columns. 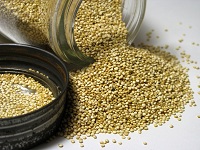 Although quinoa has only been available in North America since the 1980s, it comes from the Andean regions of South America where it has been an important food crop for 6,000 years.

The Incas believed the crop was sacred and referred to it as “chisaya mama” meaning mother of all grains.  It provided their warriors with energy and stamina.  During the conquest, the Europeans viewed quinoa as a food suited only for the Indians and they scorned it.  The conquistadors even forbade its cultivation for a period of time.

Although it is often considered a grain and treated as a grain, quinoa is actually the seed of a plant.  It is related to leafy greens such as Swiss chard and spinach.  It ranges in color from ivory to pinks, browns, and reds or almost black depending on the variety.   I am more familiar with the ivory, as it seems to be the most readily available.  I have also tried the darker red variety, and I quite like it as well.  Quinoa has a subtle, nutty flavor ,and a nice creamy texture with a slight crunch.

Quinoa is a good source of protein and one of the few plant foods that contains all nine essential amino acids that make it a complete protein and an excellent choice for anyone who follows a vegetarian diet.

Like most whole grains, quinoa has many benefits that fight cardiovascular disease.  It contains high levels of antioxidant materials, such as manganese, that help to prevent cell damage.

It is also an excellent source of magnesium which is very effective for relaxing blood vessels and a great benefit to migraine sufferers and those with high blood pressure.

Quinoa is very easy to prepare and cooks quickly.  You receive all the benefits of a whole grain, yet quinoa cooks as quickly as white rice.  This makes it a great choice for a quick yet nutritious weekday dinner.

How To Cook Quinoa – Preparation and Cooking of Quinoa:

Quinoa has a bitter coating (saponins) which needs to be rinsed away before use.  In South America, the saponin that is rinsed away is used as a clothes detergent and antiseptic to heal skin injuries.  Much of the quinoa sold commercially in North America is processed to remove this coating.  However, I always rinse it anyway.  I made the mistake of not doing so once and my quinoa tasted very bitter, not at all what I was expecting!  I suggest you do this extra step.

Rinse Quinoa: Soak the quinoa in a small saucepan, swishing the grains around with your fingers.  Drain and repeat 3 or 4 times until the water is clear.  Alternatively, rinse in cold, running water in a fine strainer.  Shake off any excess water and you are ready to proceed with cooking.

Toast or Roast Quinoa: Before cooking, quinoa can be dry-roasted in a pan or in the oven to give it a toasty flavor.  To roast quinoa, heat some oil (1 tablespoon of neutral oil for every 1 cups quinoa) over medium-low heat and add your quinoa.  Stir it constantly (so that it doesn’t burn) until it begins to turn golden, approximately 6 to 8 minutes.

To Salt or Not To Salt: No salt will make quinoa softer and fluffier, a little salt will make it firmer and it may take 1 or 2 extra minutes to cook.

Cook Quinoa: Bring two (2) cups of water or broth (you could substitute some wine for part of the water or broth) to a boil with one (1) cup of quinoa and a pinch of salt (if using).  Cover and simmer on low for 15 to 20 minutes or until you see the germ has separated from the seed.  It will have a tiny curl to it. You can also use a rice cooker, cooking it the same way you would white rice.

To Serve: After the quinoa has cooked, use a fork to fluff and separate the grains.

Quinoa can be substituted almost anywhere that you would use rice, either plain or seasoned as in pilaf.  It can also be added to stews – I sometimes use it in vegetarian chili. For breakfast, quinoa can be served porridge-style with milk and brown sugar or any of your favorite toppings.  Another way that I really enjoy quinoa is cold in a salad.  Below I’ve included a delicious recipe that uses quinoa instead of the traditional bulgur in tabbouleh.

It is easy to see why quinoa was the one called the “gold of the Incas”. Quinoa (pronounced Keen-wah) is very nutritious, grows well even under harsh conditions, is easy to prepare, and can be used in a variety of ways.

Charlotte Bradley is the publisher of YogaFlavoredLife.com and an avid yoga practitioner.  She was a student of karate for many years and took up yoga only tentatively after the birth of her sons and a knee injury left her looking for a less high-impact form of exercise.  It was love at first pose as Charlotte saw how quickly yoga sped her rehabilitation along.  She also found that yogic relaxation techniques lent her proper focus, bringing balance into her life as well as a greater appreciation for how blessed she truly is.  She lives in Ottawa, Ontario with her husband and twin boys, Charlie and Patty, who keep her on her feet and on the go.  Her golden retriever supervises Charlotte’s yoga workouts from a spare mat, with his eyes closed.