If you have never tried a fresh and crispy Spanish Churro that has been dipped in thick hot cocoa, then you certainly have not experienced one the great foods of Spain.  Today, when you walk down the center of any Spanish city, especially Madrid, on any morning, and you will see the churrers filled with people.  According to the Spanish people, churros and chocolate are an especially good remedy for hangovers. 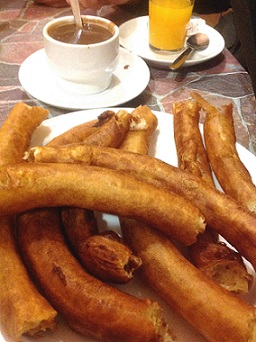 At fiesta time, there are many stalls and hand-drawn carts selling churros (and chocolate) late into the night and early into the morning.  In most towns in Spain, there can be a found a ‘churrer.’  This is a cafe that specially prepares fresh churros for breakfast, along with other traditional Spanish breakfast items.

Spanish Churros are coil-shaped, fritter-like pastries that are eaten plain or covered with cinnamon and sugar.  When prepared, they should be crisp and have a lovely golden-brown color, crunchy on the outside and soft on the inside.  This pastry can be enjoyed any time of the day as long as it is made fresh.  Throughout most of Spain they are either straight, curled or spirally twisted; however, in Southern Spain, the churro is sold in spirals or wheels, which are then cut into manageable portions after frying.  Traditionally, Spanish Churros are consumed for breakfast or as a snack in Spain, as chocolate and churros is a common breakfast for Spaniards, but churros are also available throughout the day and into the night.

According to legends, it is said that churros were the invention of nomadic Spanish shepherds.  Because of their nomadic lifestyle these shepherds were constantly moving with their sheep, and as such they only carried with them that which was essential to their survival.  Fried breads (Churros) were easy for them to cook in frying pans over fire.

There also exists a breed of sheep called the Navajo-Churro, which are descended from the Churra sheep of the Iberian Peninsula; the horns of these sheep look similar to the fried pastry.

With the Spanish settlement of the Caribbean and much of Latin America, churros made their way to the New World.  As Latin Americans immigrated to the United States, so did this delectable dessert.  Churros are now sold in street carts, markets, cafes, and restaurants.  Today, churros are also very popular in America, Portugal, and France. 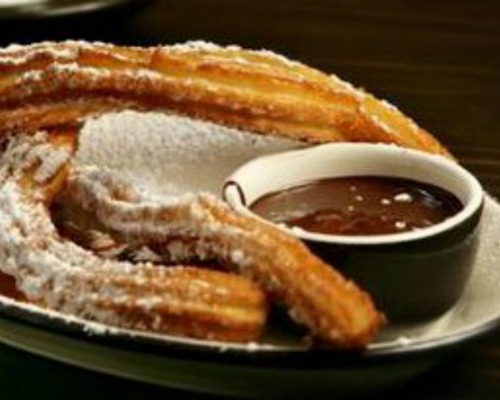