Rolled Enchiladas recipe came from a friend who does not remember who gave it to her.  She said it is an enchilada recipe from the central part of Mexico, near Mexico City.  I have to admit, the first time I tried it, I had to pull out an old translation book.  No matter how good I thought my Spanish was, it just was not quite good enough.

This Rolled Enchiladas recipe, comments, and photos are courtesy of Cynthia Detterick-Pineda of Andrews, TX. 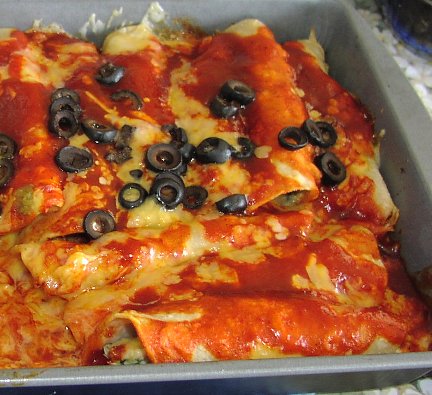 History:  Where enchiladas come from is much debated. Some would say the Aztecs, some the Mayans, and still others think it was much more recent that these appeared on the menu.  An 1949 article in American Food and Drink Magazine described enchiladas as a tourist food, not a true Mexican dish.  The first written reference I found was in 1885, regarding a legal dispute against street vendors selling enchiladas.

Enchiladas were a typical ranch house food early on, replicating the Mexican kitchen’s custom of almost always having food on the stove.  Even the cooks I know today have something on the stove at almost all hours, whether it is beans, chili, estofado (stew), or something else.  A good Hispanic cook can always feed the hungry.  There may be as many ways to prepare enchiladas as there are ideas about where they originated.

* Dried red chile peppers can be found already dried in packaged in bags in the ethnic food section and/or produce section of most supermarkets.

** You can use leftover beef roast, baked or grilled chicken, or any other thoroughly cooked meat for this (if they have not been overly seasoned).

*** Learn How To Peel Fresh Tomatoes.