I have no idea who the first person was to think of eating that silly little tail that looks to have almost no meat on it at all.  I imagine the first attempts produced what you expect from a part of the cow that swings there most of the day.  Scrawny on most, the tail has large sinewy muscles that can make it tough and stringy, leaving little to be desired.  While the oxtails you find in your meat market today are actually from cattle, the originals were from oxen.  There is little difference between the two in taste and nutrition, so they continue to be called oxtails by most.

Making a good oxtail is all in the cooking, and it does take some cooking.  This is not a quick dish by any means, and if it were it would not be nearly as good.  I have eaten oxtails that you literally had to let go of your fork and grab with your hands to try and pull the meat off simply to eat.  Oxtails in soups and stews do seem to be more tender, but you do not want to eat them in only these ways.  I wanted something I could serve as a main dish, something that could be highlighted against the side dishes, and would surprise the people at my table.  So I took some parts of stew and soup recipes, and added a little here, took some away there, and came up with this recipe that serves up more like a ragout than anything.

So to help introduce you to a meat that is absolutely wonderful when made correctly, I want to share with you my recipe for Oxtails.  No one will even realize that they are eating what some may consider “leftovers”.  If you have never eaten oxtails, I hope you will take a chance on these.

They are most definitely worth trying! And it just isn’t me who says that.

This recipe and photos are courtesy of Cynthia Detterick-Pineda of Andrews, TX.  More of Cynthia’s Southwest Recipes. 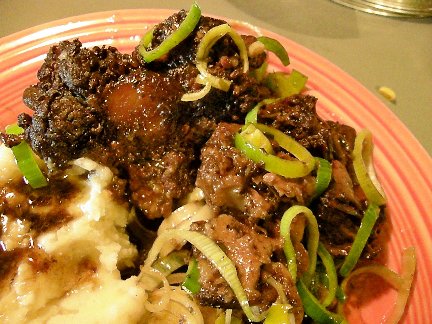 People are incredibly resourceful when they have to be.  When in need or in desperate times, they have taken what others did not want and made good use of it.  Over the centuries, poverty, war, drought, and times of starvation have helped people learn how to take what they have, no matter how little, and make something of it that will help pull them through those hard times.  Native Americans have been known for how they could use the entire animal for food, clothing, and even weapons.  There have been stories told of people lost in the mountains and without food, yet they learned how to survive on whatever foods were there for them, such as berries and small game.  But even when they had to relay on the “leftovers” of others for a food source, they usually found a way to make it more than just edible, but wonderfully delicious.

During the wars which gained Texas, New Mexico, and Oklahoma as United State’s Territories, the common people of Mexico (which then included these states) would give most all of the meat from their livestock to the soldiers as a way to help the war effort.  This often left them with little to live off.  You might think I am headed towards some recipe that includes offal, but not quite yet.

I think the introduction to these foods, as wonderful as they can be, should be a slow and gentle one.  I do not want to scare anyone away by rushing in and describing how to cook creadillas.  If you have looked over many of my recipes, you might have already seen one recipe that is highly prized by many in the Southwest, Menudo.  While there are several variations on this recipe, the main ingredient doesn’t change, and that is tripe.  Knuckles and feet from calves and pigs may be thrown in the mix, and that makes it even stranger to many people who have not been introduced to these types of foods.  These foods cover not only the Southwest, but the entire South in some form or another.  Chitterlings or Chitlins as some say it, are not far off from Menudo on my recipe scale, and it is easy to find the close cousins of creadillas and sesos in the deep South.

*I use a Malena Garnacha for this recipe.  The Torres Malena Garnacha makes a good one, as it is not expensive and is good enough to serve alongside the dish.  Remember when you are cooking with wines, if you won’t drink it, then you don‘t want to eat it in your cooking either.  Unless you just do not like to drink wine, the wine you use should always be one that you would drink yourself or serve to others.  Taste matters!