Our expert in Mexican and Southwest style cooking, Cynthia Detterick-Pineda of Andrews, TX, shares her Homemade Tamales Recipe and Carnita Recipe making secrets and lessons learned through the years. Cynthia says, “In all the years my husband and I have been married, I cannot recall a single Christmas or Thanksgiving without tamales. Though not “native” to New Mexico, tamales have been adopted by the state and are very popular. Numerous adaptations have been made on the basic tamale, including vegetarian tamales, chicken tamales, and even chocolate tamales.”

For most Mexicans and Mexican-American’s, Tamales are a Thanksgiving and Christmas tradition, especially in the state of New Mexico. Most people are intimidated by making tamales, but there is no need to be. This step-by-step process will insure that you make wonderful tamales!

Learn how to make perfect Homemade Tamales and Carnitas in your own home. For this recipe, we are covering the more traditional tamale using a pork filling although various different fillings can be used. Pork is probably the more traditional, but this recipe can use any sort of meat “stuffing” which has been marinated and cooked in a red chile sauce. We are also providing instructions to steam the tamales on the stove top, slow cooker or Instant Pot pressure cooker. 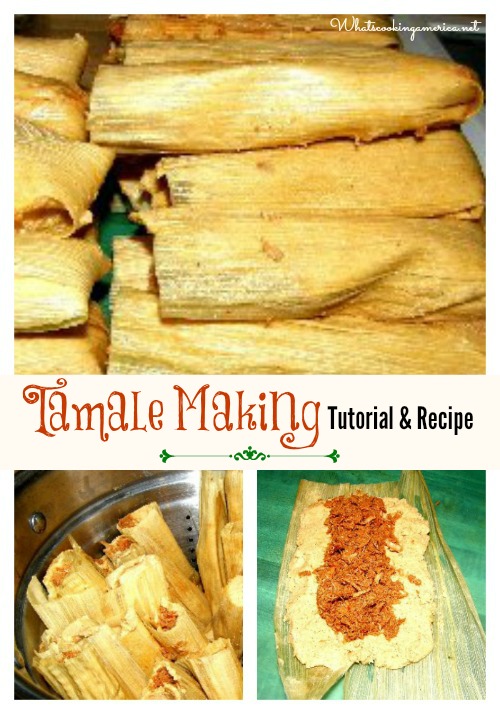 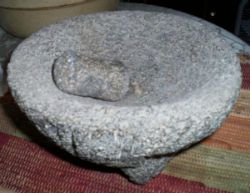 Molajete: For sake of time, and most likely sanity, I am listing more modern ingredients. I have never actually used a molajete to grind down corn for masa, but I can imagine that this would have been a time consuming and difficult job. In the distant past, metates and molcajete (see photo on right) were common place in the preparation of tamales, as well as many other dishes. I have used my molcajete, but more often I will use a food processor or blender, and am glad that I have these! Thankfully we now also have a corn masa for preparing tamales that can be found in almost all grocery stores.

There are three (3) important components to a tamale:

Carnita (kahr-NEE-tahz) – Mexican for little meats. This dish is simply small bits or shreds of well-browned pork. It’ is made from an inexpensive cut of pork that’s simmered in a small amount of water until tender, and then finished by cooking the pieces in pork fat until nicely browned all over. This recipe for Carne Adovada may also be used in place of the below Carnitas Recipe.

* Do not confuse Masa with cornmeal, as they are made from different types of corn and you will not achieve the same results in your tamales if you use cornmeal. Masa mix for tamales can be purchased in Latin American markets or supermarkets that carry Latin American products. It can also be purchased by mail order (online) if not available locally.

*** Skim the fat off of the chilled pork broth before using

Carefully separate the soaked corn husks, and place them on a towel on the counter top. Arrange your ingredients in the order you will be assembling them (at least that is how I have found is easiest). 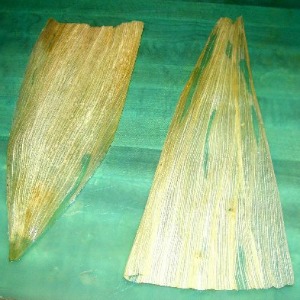 (1) Take 1 (or 2 if the corn husks are very narrow) softened corn husks and place them in your hand (pinched-looking end toward your fingers and smooth side of a corn husk up). 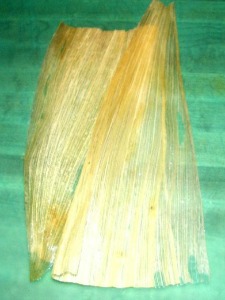 If a corn husk rips or one is too small, overlap two and continue wrapping tie as usual. 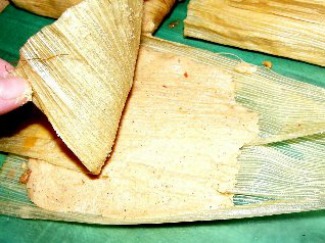 (3) Using a butter knife or your other hand, take enough of the Prepared Masa to spread over the corn husks covering the top 2/3 and 2/3 of one side, about 1/4-inch thick. If you spread it too thick, it will be difficult to roll up with the meat added and it will squeeze out onto your hand or counter. If you make it too thin, you will have the meat falling out in the steamer.

The photo shows an idea that I came up with after watching the little kids use their hands to flatten out the Masa Dough. I took a hoja and used it to press down the Masa Dough under it. It makes it easy to get an even layer that is just the right thickness. 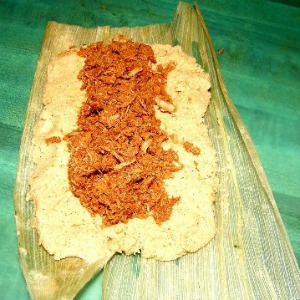 (4) Add approximately 1 to 3 tablespoons (according to your desires) of the prepared shredded meat (Carnitas), spreading it evenly down the center of the masa (careful to leave 1/2-inch at the top and bottom, and room on the sides for the masa to close around the meat).

(5) Carefully roll the tamale, starting with the side covered with the Masa Dough. Turn right side over to center of filling; fold left side over filling, allowing plain part of husk to wrap around filling. Fold top end down over bottom end.

(6) Roll it snug, but not too tight. Too tight and you might end up with a hand full of Masa and this really cannot be used to make a new one.

You may want to make your tamales “conveyor” style, or make several husks with Masa Dough, then proceed to the next step. Because of the amount of work put into making tamales, a great time to make them is when friends and family are present. Conveyor style allows you to get them into the pot faster, which means everyone gets to eat faster!

Stand the tamales upright (folded side down) in a large steamer pot fitted with a steamer basked and a lid. For best results, the tamales should be firmly packed, put not too tightly, as the dough needs room to expand some. I use my pasta pot, or my extra large stock pot with a wire rack supported on two clean bricks (very well washed bricks). There are also “tamale” pots you can buy that are made specifically for tamale making.

Once you have a full pot of assembled tamales, fill the bottom of the steamer pot with water, making sure the bottoms of the tamales are not in the water. Cover and bring just to a boil. Keep the water bubbling, not a hard boil. Once steam has begun to escape from the pot, reduce the heat to medium; keep these steaming for at least 2 hours, adding water as needed so the pot does not go dry. 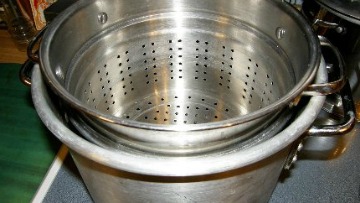 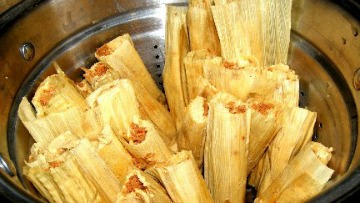 The tamales are done when the Masa Dough around the meat feels firm there are no parts of uncooked dough left. To test the tamales for doneness, remove one tamale from the steamer. Let this cool for a moment or two. As you open the husks, the dough should come away easily from the husks and be completely smooth. To make doubly sure, open up the tamales and see if they are spongy and well cooked throughout.

Remove the tamales, and let them rest on the counter for a few minutes. This will help them finish “setting” up and let them cool so no one burns their mouth. Well at least not from the stove heat, they may get a burn if the chile is extra hot!

They can be eaten right way, stored in plastic bags or containers in the refrigerator for 2 to 3 days, or they can be frozen for up to 3 months (that is if they last that long). If you use a vacuum sealer they can be kept frozen up to a year. To reheat the tamales, wrap in foil and place in 350 degree F. oven about 30 minutes.

IMPORTANT: Remember to remove the corn husk wrapper before you eat the tamale.

Tamales are meant to have the dough steam cooked. If you want to use your slow cooker, it is critical to make a steam barrier to keep the tamales out of the water at the bottom of the cooker.

Place the lid on top and find something heavy to weight down the lid to hold in the steam. Cook the tamales on high heat for 4 1/2 to 6 hours. Check the tamales after 4 hours. The tamale dough is done cooking when the corn husk wrappers easily pull away. If not, then continue cooking and checking every 45 minutes until the dough is cooked. 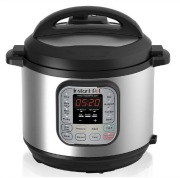 Tamale dough can steam cook in the pressure cook in a reduced amount of time.

Add one cup of water to the inner pot, then place steamer rack or steamer basket in the pot (this will prevent the tamales from touching the water while steaming). Stand the tamales upright (folded side down) in the pot. For best results, the tamales should be firmly packed, put not too tightly, as the dough needs room to expand some.

Cover with lid and seal the lid to close. Then make sure the steam valve in closed. Select the Manual button and high pressure setting. Set the cooking time for 20 minutes. Once the cooking time is done, allow the pressure cooker to natural release the pressure until the pin drops. Once all the pressure is released, open the lid. Check the tamales. The tamale dough is done cooking when the corn husk wrappers easily pull away. If not, close the lid and steamer valve and cook for additional 3 minutes and check again.