Election Day was considered an important holiday in early New England.  In importance, it ranked second only to Thanksgiving.  As our Puritan ancestors were denied the joys of Christmas and Easter, Election Day with its festivities of parades, religious ceremonies, balls, and fine foods helped compensate for the loss.  Because of this, they made Election Day into a holiday in which everything broke loose, people gathered in town and visited each others’ houses. 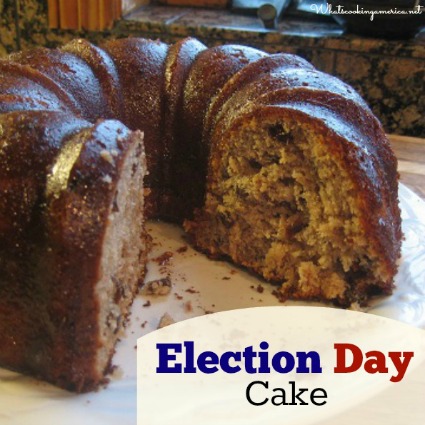 History:  Ruled by the English, colonial American farmers were called to military practice for days of training sessions (know as mustering) to the nearest designated towns.  Alice Ross, in her article on Election Cakes for the Journal of Antiques and Collectibles states:

They traveled (sometimes for days) and descended on the nearest designated towns for days of training sessions (mustering) and nights of socializing, carousing, and partaking of what become know as “Muster Cake.”  Townsfolk, of necessity, had prepared for the onslaught by baking and cooking for the numbers that would fill every bed in homes, taverns, and inns.

The Yankee Magazine Cookbook says the cake was “served either at the church supper preceding the town meeting, or sold outside the polling place, like a one-cake bake sale, to help sustain voters.”

1771 – These cakes were baked to celebrate Election Days at least as early as 1771 in Connecticut, before the American Revolution of 1775.  The Election Cake, as all cakes baked in colonial homes, was yeast-leavened, as there was no commercial baking powder, and they were baked in brick fireplace ovens.  Colonial women vied with each other as to who baked the best cakes as families exchanged visits and treated their guest with slices of this cake.  Historians feel that the recipe for Election Cake was adapted from popular period English yeast breads.

According to a Washington Post newspaper article called, Election Day Cake Is a Piece of Americana, But Not Everyone’s Choice, By Bonnie S. Benwick, Wednesday, October 27, 2004:

All involved had to keep up their strength, and Election Day Cake filled the bill. After three dough risings, “cider and delectable cake was served at Connecticut’s expense.” We know this because the Society of the Descendants of the Founders of Hartford has found references to the state’s 1771 General Assembly reimbursing one Ezekial Williams for the ingredients of an Election Day Cake (which certainly had to include nutmeg, since Connecticut’s known as the Nutmeg State. But that’s another story). A “huge election cake” was made for the members of the First Company Governor’s Foot Guard in 1775.

According to the Culinary Historians of New York article, Fall 2004, Volume 18, No. 1, called From Great Cake to Curiosity: On the Trail of the Hartford Election Cake, by Stephen Schmidt:

The itemized record of Connecticut’s election Day expenditures for the year 1771 certainly point toward a cake in the bushel range.  All told, the Connecticut colony spent a little over 23 on “sundries,” including “cake,” for it Election Day festivities in that year.  The materials of “the great election cake” itself cost 3, and a certain Mrs. Ledlie was paid a littler over 2 for making it.  In 1771, 5 was a hefty sum to pay for a cake!

1796 – Amelia Simmons published a recipe for this cake in her cookbook American Cookery, 2nd Edition, in 1796:

Election cake – Thirty quarts of flour, 10 pound butter, 14 pound sugar, 12 pound raisins, 3 doz eggs, one pint wine, one quart brandy, 4 ounces cinnamon, 4 ounces fine colander seed, 3 ounces ground allspice; wet flour with milk to the consistence of bread over night, adding one quart yeast; the next morning work the butter and sugar together for half an hour, which will render the cake much lighter and whiter; when it has rise light work in every other ingredient except the plumbs, which work in when going into the oven.

1830 – The cake became known as Hartford Election Cake when politicians there served it to men who voted a straight party ticket.  While waiting for election result, it was a New England tradition to serve these huge Election Cakes (each cake weighing approximately 12 pounds each).  Housewives established their reputations as socialites and hostesses on the quality of their cakes.  Connecticut historian, J. Hammond Trumbell, in1886 wrote about it this way:

“Election Day (the first Thursday in May), the reddest letter in our calendar, brightened the whole year. Good housekeepers were expected to have finished their spring cleaning long before…election cake was rising to make ready for the oven: and few homes were too poor to offer these refreshments to visitors.”

An article in the New York Times on November 2, 1988 called Election Cake: A Noble Tradition, by Marian Burros states the following:

“So what then is the how, when, where, what and why of Election Cakes?  The Connecticut Historical Society provided some answers, but…said…that some conflicts cannot be resolved. “What you can say…is that this is cake traditionally made in connection with elections in Hartford form pre-Revolutionary times…the Colonial Records of Connecticut from May 1771 show that one Ezekial Williams Esq. submitted a bill to the Connecticut General Assembly for the cost of making the cake for the election’.”  To understand why the government of the colony of Connecticut would pay for such a cake, along with other food, you have to know how the Governor of the colony, and later the state, was elected.  In early spring, elections were held in Connecticut towns, and in May representatives of the towns gathered in Hartford, the capitol, for the formal counting of the votes, first for Governor, then for Lieutenant Governor and then for other officials.  The counting often went on into the night . The representatives came the day before and stayed overnight in Hartford…in every Hartford home, Election Cakes were made to serve the out-of-town lodgers. According to… [The Connecticut Historical Society], housewives planned for Election Day well in advance and made cakes that would keep.  By the mid-1800’s Election Day had declined as a major festival and around 1875 the date for election of the Governor shifted to January from May…”

1900s – Alice Ross, in her article on Election Cakes for the Journal of Antiques and Collectibles states:

“After 1900, Election Day in the cities lost a good deal of this tradition.  Large influxes of non-English immigrants kept different holiday customs, and the restitution and commercialization of Christmas and Easter probably weakened its appeal.  We were no longer the only democracy, and such things as popular elections may not have seemed as uniquely American.”

I created this wonderful modern version of the old-fashioned Election Day Cake after reading many older and a few more modern recipes. My husband actually help me make this cake, which is very unusual for him, as he was excited to try it. He loved it! 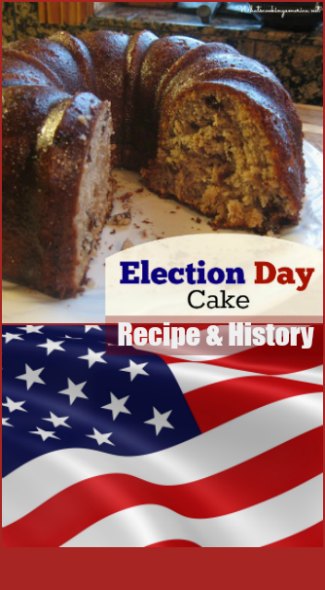