This is the dressing of oyster lover dreams!  The oyster nectar makes the dressing so moist and flavorful.  What’s not to love about a dressing that includes fresh oysters?   Oyster Dressing can often be one of the best parts of a Thanksgiving dinner.  This dressing must be served as a side dish and not as a turkey stuffing in the turkey.

This recipe was shared with me by Doc Lawrence and his Sips Across America columns.  The recipe is by Chef Josh Butler, Executive Chef at the Florida Governor’s Mansion in Tallassee, TN. 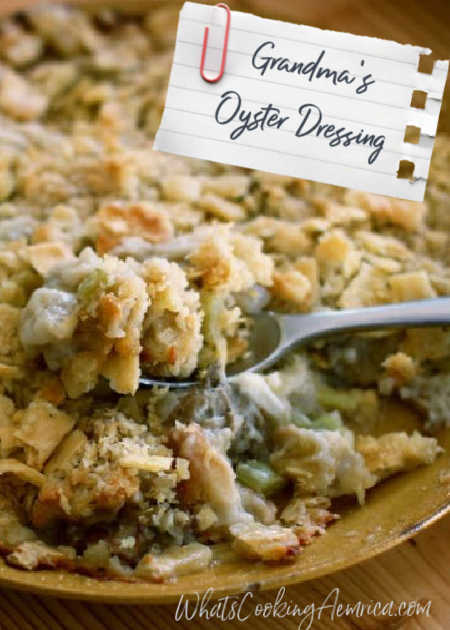 Learn How To Shuck Oysters.

Oyster dressing is a favorite of New Englanders that dates back to the 18th century in America as oysters were predominantly found along the eastern coast of North America.  Oysters had been used with or without bread crumbs for stuffing poultry or fish over 335 years.  The tradition of oyster dressing was brought over from British colonists that settled in America.  In Britain, oysters were added to stuffing that was more traditionally used in fowl (chicken), fish, calves he ad, leg of mutton, hares (rabbit) and pigs.

Oysters used to be more plentiful and the most commonly eaten shellfish in America.  They were cheap and plentiful enough for the working class to afford. Many early American cooks stuffed their turkeys and chicken with oysters since it was an inexpensive source of protein.  Turkeys were very expensive and adding the oysters helped ensure there was enough protein to feed a large group.  As the express wagons and railroads made it more possible to transport goods in the mid-19th century, the oyster market was able to expand and set off a national oyster addiction.  Fresh, raw oysters were commonly served in taverns as oysters were a cheap food to serve with beer and liquor.  By 1850, every major town in America had an Oyster saloon also known as oyster bars, oyster house or raw bar.

1685 – Earliest cookbook reference:  The Accomplisht Cook, London, Sauce with Oysters and Bacon, The oysters were cooked and mixed with spices and herbs stuffed in the pullets belly and roasted.

1796 – American Cookery by Amelia Simmons, Meats – To smother a Fowl in Oysters: “Gill the bird with dry oysters, and sew up and boil in water just sufficient to cover the bird, salt and season to your taste – when done tender, put it into a deep dish and pour over it a pint of stewed oysters, well buttered and peppered, garnish a turkey with sprigs of parsley or leaves of celery: a fowl is best with a parsley sauce

1832 – The Cook’s Own Book: Being A Complete Culinary Encyclopedia, by A Boston Housekeeper.  Chicken Stuffing recipe – “Fill your chickens with young oysters cut small, truffles, parsley and spices and roast them.”

1880 – Miss Parloa’s New Cook Book and Marketing Guide by Maria Parloa – Boiled Turkey – “Chop half a head of celery very fine.  Mix with it one quart of bread crumbs, two scant table-spoonfuls of salt, half a teaspoonful of pepper, two heaping table-spoonfuls of butter and two eggs.  Stuff the turkey with this; sew up and truss.  The stuffing may be made the same as above, only substitute oysters for celery, and serve with oyster sauce.”

The Washington Post, Food Section – A Short Course On the History of 8 Thanksgiving Foods, by Amanda Moniz, November 22, 2013

** Lean How To Shuck Oysters

Creamed Oysters in Acorn Squash
This outstanding dish combines two of my favorite foods, oysters and acorn squash.  Besides being delicious, it is beautiful to look at.

Oyster Casserole
This is an excellent oyster dish to serve your family or friends.

Oysters Casino
Oyster lover’s delight!  A very easy recipe to prepare and always a favorite with my husband.

Scalloped Oysters
Scalloped oysters are fantastic served as a special side dish, first course, or appetizer with crackers.  For many families, this dish is a Christmas tradition.