This Vegan Cinnamon Roll is a version of my famous Harvest Cinnamon Rolls was created by Becky Ansell of Hampshire, United Kingdom.

Becky says, “I came across your recipe for harvest cinnamon rolls about a year or so ago while looking for a Cinnabon-style recipe (we don’t have cinnamon rolls here in England, but my husband had tried a Cinnabon and loved it) as they are not available in the U.K.  I was looking for a recipe I could make for him at home. Your recipe turned out great and I am not a particularly good cook!  I have made them a few times now.  We have made it a new tradition to have these on Christmas morning (and birthdays, and wedding anniversary…..!).

I have since become a Vegan and have ‘veganised’ your recipe and this vegan cinnamon roll version still works wonderfully.  Many thanks for your help and thanks for a great recipe that we love!” 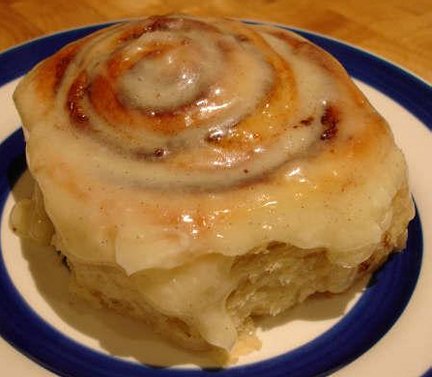