Try this Pumpkin Empanada recipe this fall.  They are little pastry hand pies filled with a sweet pumpkin filling. 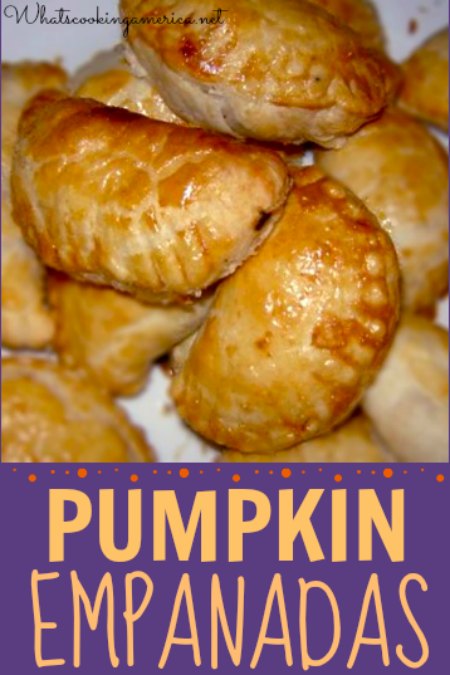 An empanada is a stuffed bread or pastry filled with a variety of meats, cheeses, vegetables or fruits.  The origins of empanadas can trace their roots back to Spain in the 1500’s and the Spanish colonizers introduced this dish to many Latin American countries. Empanandas also have strong similarities to Samosas from India which are meat-filled pies.

In the United States, pumpkin pie is the most popular dessert to serve during the Thanksgiving holiday.  However, for most Mexican-American families, pumpkin empanadas are at the top of the dessert list!

This Pumpkin Empanada recipe is courtesy of Cynthia Detterick-Pineda of Andrews, TX.  Per Cynthia, “Pumpkin pie may not be on the menu for a traditional Mexican-style Thanksgiving, but the Pumpkin Empanada most definitely is.  At least they are on the Thanksgiving menus I have grown up with.”   As part of a Mexican tradition,  pumpkin empanadas are made both on Thanksgiving and Christmas.  Often they are served during Noche Buena when those re-enacting the travels of Mary and Joseph have stopped at the chosen home to feast.

* If you choose to use canned pumpkin, make sure it is pumpkin puree and not pumpkin pie filling.

* To get the fresh cooked pumpkin to same consistency of a store bought canned pumpkin puree, use a food processor to make a smooth puree. Then pour it in a sieve (or cheesecloth or coffee filter) placed in a deep bowl.  Stir with a spoon until all the liquid is sieved completely and you get some rich thick Pumpkin Puree.