This delicious robust tomato-based fish Bermuda Fish Chowder is considered to be Bermuda’s national dish.  Bermudians have their own answer to bouillabaisse.

This chowder differs from American versions of chowder by its dark, rich color and the finely minced quality of the ingredients.  It is a British dish that came over with the first colonists in the mid 1600s, and not an original American dish as commonly thought. The chowder that the British colonists prepared left the locals very unsatisfied, so what did they do – they quickly made it their own chowder to their tastes.

The perfect list of ingredients in this chowder is hotly contested by islanders, many of whom follow their own traditional family recipes, which they keep closely guarded.

Fish Chowder is different in content, taste, and texture to any New England style fish or clam chowder.  It begins with a good stock, rich and flavorful, made from fresh local deboned fish (with fish heads and tails used).  The chowder should not be too watery, not be over thickened with corn starch, and with too much tomato paste.  The best recipe use boiled up whole fish carcasses (including the heads).

The chowder is traditionally accompanied by a splash of sherry peppers (ripe and very hot bird peppers marinated in sherry with herbs and spices) and black rum – rum darkened by molasses and a special barrel aging process).  The commercial local version of this condiment (sherry peppers) is made by Bermuda-based Outerbridge Peppers from a secret recipe of sherry wine, carefully selected peppers, and other good things.  Royal Navy sailors first made this popular pepper sauce to make their rations more interesting.  This sauce is not as hot as Tabasco, but it still packs a peppery punch that can transform the blandest chowder into a fiery brew. 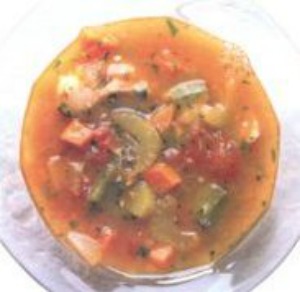 Photo by Travel Information from Antor.org

Source:  I slightly adapted this recipe by Yeaton Outerbridge for easier reading.

One Response to “Bermuda Fish Chowder History and Recipe”