You can tell you are approaching Monroe, Wisconsin, when cheese factories and dairy cows begin to appear all over the countryside.  Just veer off the highways onto Wisconsin’s back roads to discover the dozens of small, quality cheese producers.  One cheese in particular stand alone in Monroe.  That is Limburger cheese, undoubtedly one of the stinkiest cheeses in the world! 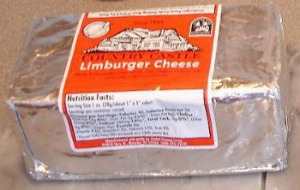 Limburger actually smells worse than it tastes!  For many people though, the aroma is both the beginning and the end of the acquaintance.  It is a food people either love or love to hate.

The people of Wisconsin have such affection for this strong-smelling Limburger that their state is probably the only place in America where you can go into a tavern and order a Limburger on rye bread with raw onions and brown mustard.  The sandwich is usually served on freezer paper and is traditionally washed down with a locally brewed beer.  Some places even give you a breath mint.

This cheese gets more pungent with age.  But despite its aroma, Limburger cheese has legions of fans.

When the cheese is very young, up to one month old, it is firm, crumbly and salty, much like Feta cheese.

At six weeks, it is softening on the corners but still has a firm center that’s salty and chalky.

At two months, the core is almost gone and the body is smooth and creamy.

This area of Wisconsin, just outside of Monroe in Green County, used to be home to more than 100 small cheese plants making Limburger, among other Old World varieties.

Cheese-making began in Wisconsin around 1840, when immigrants with cheese-making skills began arriving in the area.  A group of Swiss immigrants settled in Green County, around Monroe, and began producing the same cheese they had enjoyed in their homeland.  In 1867, Rudolph Benkerts, Green County’s first cheese maker, began making Limburger cheese in his home cellar.  By 1880, Limburger was being made a twenty-five cheese factories in Green County, and by 1930, there were more than a hundred companies producing it.  Today, only one company in the United States still make it, the Chalet Cheese Cooperative of Monroe, Wisconsin.

My father, Kenneth Stewart, loved Limburger sandwiches! As a young girl, whenever Dad would eat one of his strong smelling sandwiches, my brothers and I would cover our noses and make funny noises as he shooed us off. – Linda Stradley

Source: Photo by Barrett Buss from the website Too Many Chefs.

I just read your article about Limburger.  I have never tried that sandwich, but today I am going to.  That cheese is my absolute favorite cheese of all time.  My mother used to eat it when I was a child, and she would give me some.  I loved it even then.  I sent for some a time back and when I got it I was disappointed because it was very tasty on the outside, but not so much on the inside.  At last I have a grocery store that stocks it and I am able to buy is regularly.  It is almost like I am addicted to it!  I am going to see about taking a trip over to Wisconsin and trying to find the place that makes it.

You know, I just have to tell you this… I get a little anxious when I run low on the cheese.  I wonder if it is addictive?  ha ha ha… Maybe I will have to go to a Limburger rehab place.  Also, my little Pomeranian recently had surgery, and the only way I could get her to take her pain medication was by putting it in the Limburger cheese.  Of course, with the odor she smells it the minute I take it out of the fridge, and comes running and begs me for some.  So, Sassy and myself always enjoy the cheese together. – Mary Borrello