A favorite Hawaiian way to eat Spam is in the form of a musubi (pronounced moo-soo-bee, with no accent).  It is a fried slice of spam on rice pressed together to form a small block, then wrapped with a strip of seaweed.  The Spam musubi is eaten as a sandwich, and it is perhaps the Island’s favorite “to go” or snack food.

Spam musubi is literally everywhere in Hawaii, including local convenience stores, grocery stores, school cafeterias, and even at the zoo.  Eating a Spam musubi seems to serve as a rite of passage for newcomers anxious to attain “local” status.

A special kitchen gadget, known as the Spam Musubi Press (see photo below), is responsible for the proliferation of this treat.  It is a special plexiglas mold with the outline of a single Spam slice. 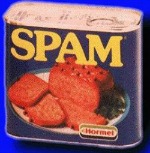 Hawaiians have a love affair with Spam – they eat it as a delicacy, adding it to soups and stews, treating it as a side dish for breakfast, and enjoying it as the main event for lunch and dinner.  Residents of Hawaii consume more Spam than populations anywhere else in the world: More than four million cans every year, or an average twelve cans of Spam per person per year. In fact,  Hawaii is so well associated with Spam that Hormel even introduced a limited edition “Hawaii can in 2003.

The Hormel Company, in Austin, Minnesota, developed America’s first canned ham in 1926.   After the hams were cut, the company was left with thousands of pounds of nearly worthless pork shoulder.  Jay C. Hormel, son of Hormel founder George A. Hormel, developed the ideas of using the pork shoulder in a new product called “Hormel Spiced Ham.

Since the name was rather uninspiring, a contest was held at a new year’s Eve party for a new name with a $100 prize to the winner.  The winning name was the name it goes by today – Spam.  Kenneth Daigneau, an actor and the brother of a Hormel vice president Ralph Daigeau, won the contest.

During World War II, sales of Spam soared.  In part because it requires no refrigeration, Spam was perfect for the military and became a standard K-ration for U.S. soldiers.  Military personnel introduced it in Hawaii and elsewhere. 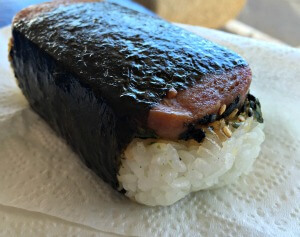 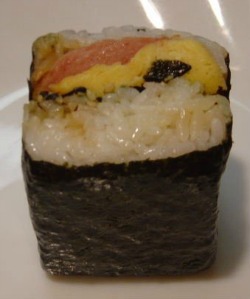 * Only use Japanese medium-grain sushi rice in sushi making.  It is a medium-grained rice and gets sticky when it is cooked.  Long-grained American rice will not work because it is drier and doesn't stick together.

** Roasted-Seaweed (Nori) - Sheets of thin seaweed which is pressed and dried.  As a general rule of thumb – good Nori is very dark green, almost black in color.