Pin1K
Share86
Tweet
Yum
Email
German Marble Cake brings back fond childhood memories for my daughters, as their Grandma Gertie always made Marble Cake for them.  Whenever Grandma Gertie knew that company was coming over, she would have her marble cake ready to serve.  It was a simple yellow and chocolate swirled cake made in either a loaf pan or just a cake layer.  Grandma’s chocolate frosting had an extra special flavor because she added a little instant coffee.  This recipe comes close to how she used to make her cake.
This German Marble Cake brings back such happy memories for the girls.  They loved that chocolate frosting, especially with the sprinkles on top!  Of course they also had to enjoy a nice cold glass of milk to wash the cake down.  My daughter Brenda Weller says, “Whenever I see marble cake at a bakery, I have to stop and buy a piece to enjoy and think of my Grandma Gertie.” 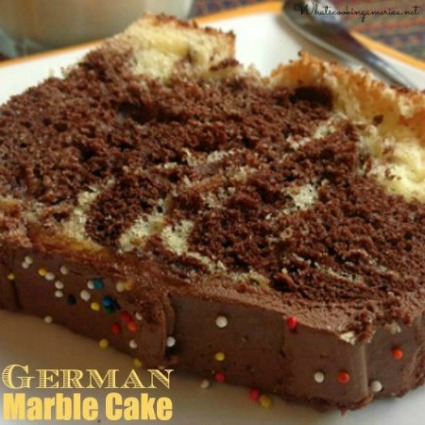 Marble cake called Marmorkuchen in German, originated in Germany back in the 19th Century.  The technique of this cake is to create a marble effect with two different colors of cake batters together. Molasses, spices, raisins, currants, and even coffee was originally used to create the darker color batter for the marbling effect.  German immigrants that came to America before the Civil War brought with them the tradition of marble cake.  Another variation to the theme of marble cake is a Harlequin cake which creates a checkerboard pattern of light and dark colors.

Marble Cake.  One pound each of sugar, flour and butter, the whites of sixteen eggs, quarter of a pound of bleached and split almonds, half of a citron sliced and sufficient cochineal (which should be procured at confectioner’s, as that prepared by druggists is not so suitable); cream together the butter and flour; beat together very light the egg-whites and sugar; put all together and beat thoroughly; color one-third of the batter any shade you like; put well-greased tissue-paper around the mould, then put in half of the white batter, a layer of citron and almonds, the colored batter, another layer of citron and almonds, and the remainder of white batter; bake in a moderate oven.

1889:  German-Jewish bakers introduced chocolate cake batter to marble cake.  First references to chocolate marble cake recipes: A unt Babette’s Cook book: Foreign and Domestic Reciepts for the Household.  This recipe features chocolate to create the dark batter for the marbling effect instead of the molasses and spices that were traditionally used.  This change mirrored America’s love of chocolate which was becoming more affordable with mass production and no longer just for the upper class.

Marble Cake. Take one cup of butter, two cups of pulverized sugar, three cups of flour, four eggs, one cup of sweet milk and two teaspoonfuls of baking powder.  When the cake is mixed, take out about a soup plateful of the batter, and stir into this about two heaping tablespoonfuls of grated chocolate (which you must grate before you begin to mix the cake).  Fill your cake mold about two inches deep with yellow batter and then drop in the brown in three or four places.  Do this a spoonful at a time, and then pour in more yellow batter, and so on until all is used up.

The popularity of marble cake continued through the 1970’s and 1980’s then interest started to drop as many Jewish bakers started to retire and Americans became interested in other styles of baking.