Pin16
Share17
Tweet
Yum
Email
Hundreds of thousands of King Cakes are eaten during Mardi Gras each year in New Orleans, Louisiana.  In fact, a Mardi Gras party would not be authentic without the traditional King Cake as the center of the party.  The cake is made with a rich Danish dough, baked and covered with a sugar topping in Mardi Gras colors; purple representing justice, green representing faith, and gold representing power.  The cakes are easy to make, and in New Orleans every baker seems to have its own version for sale.  The cakes are prepared for the period between the Twelfth Night and Ash Wednesday.  Many are shipped throughout the United States for those displaced New Orleanians longing for a taste of Mardi Gras.  The Mardi Gras or Carnival season officially begins on January 6th, or the Twelfth Night.

Originally objects such as coins, beans, pecans, and peas were hidden inside of every King Cake.  Wealthy Louisiana plantation owners in the later 1800s would sometimes put a precious stone or jewel in their King Cakes.  In the mid-1900s, a small plastic baby became the symbol of this Holy Day and was placed inside of each King Cake.

The New Orleans tradition is that each person takes a piece of cake hoping to find the plastic baby inside.  The recipient of the plastic baby is “crowned” King or Queen for the day and that person is obligated to host the following year’s party and supply the King Cake.

The King Cake tradition came to New Orleans with the French settlers around 1870, continuing a custom dating back to twelfth century France.  Similar cakes were used then to celebrate the coming of the three wise men calling it the feast of Epiphany, Twelfth Night, or King’s Day. 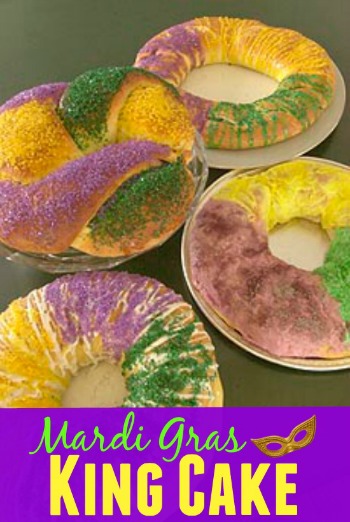 King Cakes are created in varied shapes and flavors.  From braided King Cake to the traditional New Orleans King Cake, they are all something to celebrate.

This is my version of the traditional King Cake.  Normally this is a very labor intensive cake to make, so I use the bread machine to do the work for me.  Using the dough cycle on your bread machine will half the work needed for this traditional Mardi Gras treat.  King Cakes are a lot like cinnamon rolls but they are twisted into a large oval.